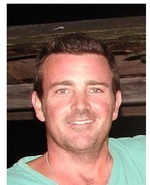 James Francis McElgin Jr., age 45, passed away on Friday, December 6, 2013. Jamie was born on October 17, 1968 in Philadelphia, Pennsylvania. Jamie is survived by his devoted wife Heather and daughters Morgan, Chloe, and Sophia. He was preceded in death by his father James McElgin and his mother Peggy Frank. Jamie grew up in Ocean City, New Jersey and graduated from Ocean City High School in 1988. He went on to attend Hartford College. Jamie worked for many years in Ocean City in the family restaurant and hotel business and in real estate. Most recently, Jamie worked for Merit Service Solutions in Glenmoore, Pennsylvania. Jamie was a long-time camper and counselor at Camp Tecumseh in Moultonborough, New Hampshire where he was known for his prowess as a fencer and as a member of the Trip Crew. He was a true Tecumseh man who was committed to developing the character of countless young men through his example of service to others. Jamie also pursued his fencing career as a student of Maestro Lajos Csiszar at Salle Csiszar in Philadelphia. Jamie was a loving husband, devoted father, and loyal friend. He was a man of strong faith and a generous heart who loved unconditionally. Jamie touched many lives with his loyalty and love and the impact of his earthly walk will echo in the lives of all who were touched by his passion for life, his humor, and his grace.

Donations in Jamie’s memory can be made to:
The Camp Tecumseh Blue Gray Scholarship Fund
1906 Johnson Road
Plymouth Meeting, PA 19462