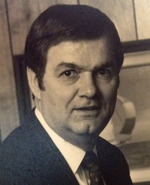 The staff at the South Carolina Cremation Society offers their condolences to family and friends. We join you in remembering.

A Memorial Mass for Mr. Paul John Robichaud will be celebrated  at 11am on Tuesday, December 31, 2013 at St. Peter’s Catholic Church, Columbia.
Mr. Robichaud, 83, of Columbia, SC died December 9, 2013 at his residence.


The son of the late Edmond Robichaud and Jospehine Brideau Robichaud, he was born in Cambridge, Massachusetts, graduated from Boston College and then served in the US Army during the Korean Conflict.  After the war, he  worked as an electronics executive, beginning his career in California, spending most of the 1970’s in Zurich Switzerland and then in Attleboro, MA before retiring to Columbia fifteen years ago.