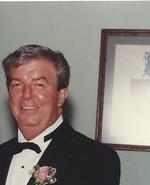 He was born and raised in West Philadelphia with his parents James and Bridget, and his seven siblings, Mary, Catherine, James, Theresa, Anne (his twin sister), Agnes and Margaret.

After attending St. Thomas Moore High School, he entered the Army where he served his country proudly.

After his honorable discharge, he married his bride of nearly 57 years, Kate (nee Logan).  Together they raised their family of seven children in their Upper Darby home.

His lifelong career was dedicated to champion the cause of the working man.  For many years he served as President of Local 119 at the General Electric plant at 67th and Elmwood in Philadelphia.  Throughout his tenure he successfully negotiated multiple contract agreements resulting in higher wages and improved working conditions on behalf of his membership.

His labor career continued and in 1982, he was elected Chairman of the IUE-General Electric Conference Board where he provided dedicated leadership for social and economic justice.

He is predeceased by his wife, his daughter Margaret (Mimi) and six siblings.

Friends and relatives are invited to visit with his family and pay their respects on Thursday, March 20th from 4:00 pm to 7:00 pm, and Friday morning, March 21st, from 9:30 am to 10:30 pm at the John P. Donahue Funeral Home, Walnut Street and Copley Road (201 Copley Road) Upper Darby, followed by a Mass of Christian Burial at 11:00 am in St. Alice Church (across the street from the funeral home).  Interment will be at Saints Peter and Paul Cemetery.

Contributions may be made to Sisters of Saint Joseph Villa, 110 W. Wissahickon Ave., Flourtown, PA  19031.

Joe’s delightful sense of humor and quick wit endeared him to everyone who knew him and he will be greatly missed.