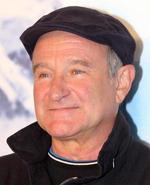 Academy Award-winning actor Robin Williams passed away at his Northern California home on Monday, August 11, 2014, at the age of 63. He died of an apparent suicide.

Williams’ heartfelt performances and iconic characters transformed him into a pop culture star. He touched audiences with affable humor and quirky charisma, while his gravitas in more serious roles garnered critical acclaim.

He began his career as a successful standup comedian in the 1970’s and continued to tour through 2009. Williams first entered pop culture as the physically comic alien Mork on TV’s Mork & Mindy and went on to star in many acclaimed films including: The World According to Garp (1982), Dead Poets Society (1989), Hook (1991), Aladdin (1992), Mrs. Doubtfire (1993), Jumanji (1995), The Birdcage (1996), Night at the Museum (2006), and Happy Feet (2006). His role as an empathetic psychologist in Good Will Hunting (1997) earned him an Academy Award for Best Supporting Actor. He has also appeared on Broadway in Rajiv Joseph's Bengal Tiger at the Baghdad Zoo and Robin Williams: Live on Broadway, a one-man show.

“Robin Williams was an airman, a doctor, a genie, a nanny, a president, a professor, a bangarang Peter Pan, and everything in between. But he was one of a kind. He arrived in our lives as an alien – but he ended up touching every element of the human spirit. He made us laugh. He made us cry. He gave his immeasurable talent freely and generously to those who needed it most – from our troops stationed abroad to the marginalized on our own streets.”

Williams was born to Laurie McLaurin and Robert Fitzgerald Williams in Chicago and grew up in the Midwest. He is the great-great-grandson of former Mississippi state governor and senator Anselm J. McLaurin. He was a classmate of Christopher Reeve at the prestigious Juilliard School, which he left in 1976.