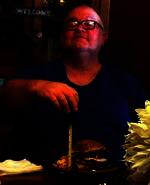 Billy was born at Lowry Air Force Base in Denver, Colorado on June 4, 1954, to the late William A. Watson, Sr, and Betty Jane ( Rush )Watson.

Per Billʼs wishes, cremation rites have been accorded . A reception and celebration of his life was held at his residence on Sunday, , November 9th from 2-4 pm.

In lieu of flowers, memorials may be made to St. Judeʼs Children's Research Hospital , Memphis, or a local animal shelter.

Billy grew up outside of Pittsburgh, Pa, in North Hills , Fox Chapel , and Cranberry Township. He attended and graduated from Seneca Valley High School in 1972. He received a swimming scholarship and attended California State College after graduation, majoring in English and Journalism.

After college, he moved to Warren, Ohio where he was surrounded by family and dear , lifelong friends. Being the free spirit that he was, he moved to Sacramento , California , in 1980 . He was employed at Mercy General Hospital as a Cardiac Technician for over 30 years. He was loved and respected for his kind, gentle ways , quick wit and humor.
Billy had a unique gift for the spoken and written word. His letters, cards and gifts were cherished. He loved singing and playing his guitar. His huge heart was matched only by his generosity.

Little Billy, Billy Ray, Billy, Uncle Billy Bum, Sweet Willie Watson will be missed by all those he met and loved him back.