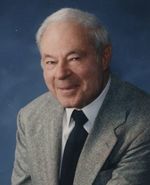 In Memoriam of Warren Smith

Warren F. Smith, Jr. golf professional, born October 20, 1915, died May 3, 2015. Father was Warren Floyd Smith of Goodwater, Ala. Mother Josephine Catherine Johnson of Gadsden, Ala. Graduated Gadsden High School and married Augusta Georgia Woodliff June 7, 1941 who preceded him in death in 1991.
Smith was known for his long tee shots and accurate iron game. His greatest golf achievement came in 1955 during the Texas Open, when he hit seven birdies in a row—then a record for a PGA event.
Smith started playing golf at the age of 11. He won his first match at 16, set a new amateur record of 31 at the Gadsden Country Club at 18, and won the 25th annual Beauvoir Country Club Invitational in Montgomery, Ala., at 19. Smith served three months in the U.S. Merchant Marine at the end of World War II, delivering troop supplies to Naples, Italy. After his war service Smith returned to the U.S. to serve as head pro at Seiberling Country Club in Akron, Ohio while working for Goodyear Tire and Rubber Company. He then became the first head pro at Oak Hills Country Club in San Antonio, Texas.
Smith was instrumental in luring the Texas Open to Oak Hills, where it was played from 1961 to 1966. He played often with good friends Dow Finsterwald and Arnold Palmer. Smith launched Oak Hills' Junior Program, which turned out four all-city champions, and he mentored several young golfers, including Joe Conrad, who won the British Amateur in 1955. He also coached the Trinity University (Texas) golf team in its 1952 victory over golf powerhouse North Texas State University – the latter school's only loss from 1949 to 1952 when it won four NCAA golf championships.
Smith was appointed head pro at Cherry Hills Country Club in Englewood, Colo. in 1963. He was named the PGA Golf Professional of the Year in 1973 and was awarded a red jacket and honorary lifetime membership from the club—a distinction that, at the time, had been conferred upon only President Dwight D. Eisenhower and Palmer.
Smith played in two PGA Championships, going to the quarterfinals of match play in 1957. He played in the 1966 U.S. Open and was second in the 1965 Colorado Open. He shot his age at 66 and every year until he retired from the game in 2003 at the age of 87. He scored seven holes-in-one and three double eagles. During his tenure at Cherry Hills, Smith mentored 16 assistant professionals who went on to become head professionals at country clubs in Houston, Dallas, Phoenix, New Orleans, Denver, Vail and elsewhere.
Smith was president of the Central Texas PGA Section for three terms and the Colorado PGA Section for five. He was named to the Colorado Golf Hall of Fame in 1978. The Colorado Section's lifetime achievement award was named for him and he was its first recipient in 1986. Smith was named to the PGA Golf Professional Hall of Fame in 2005. That same year, Oak Hills named a Junior Golfer Scholarship after him.
Smith lived in Denver until 2013, when he moved to Phoenix, Arizona. He was a member of the Presbyterian Church. He is survived by his daughter, Rebecca S. Lake and son, Warren W. Smith; grandchildren Chad M. Smith, Christopher W. Smith, Deborah G. Ivar, Robert Alan Glover, and Matthew Warren Lake; and great-grandchildren Chad Smith Jr., Zoey Smith, Alexis Smith, Brigitte Smith, Natalee Smith, Alexandra Ivar, Dylan Ivar, Briana Ivar, Nicole Glover, Faith Lake, Taylor Lake and Alice Childress.
In in lieu of flowers, the family has requested donations in Smith’s honor to Links Players International (501 c-3), 755 N. Peach Ave., Suite E 11, Clovis CA 93611. An online memorial to honor Smith is at http://obits.org/invitations/CzBaw8-STUhidVWjBsYPzA/accept

All of us at Smart Cremation offer our sincere condolences to family and friends as we pay tribute. Please add your own memories and photos or light a candle to express your own thoughts to the family.

Home
MEMORIAL CREATED BY:
Smart Cremation on May 12, 2015