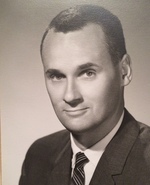 After serving in WWII from 1943-1946, Dick returned from his station with the U.S. Infantry in Italy and began his college career. He studied at Mt. Allison University then continued his education and graduated from McGill University, Montreal in 1952. Dick worked as an engineer in the pulp and paper industry in Shawining, Quebec for several years. After capturing the heart of Claire Sokolyk, they married and started a family. In 1960 Dick was recruited by Scott Paper Company and he relocated the family to Media, PA, where Dick had a successful career as an engineer with many patented inventions. The most celebrated contribution was his work on the Yankee Dryer where he applied the emerging technology of finite analysis using IBM mainframe computing. (which gives different paper products their texture and absorbability (makes toilet paper soft)). After retiring, Dick consulted for Kimberly-Clark, served as a regional director for TAPPI, the Technology Association for the Pulp and Paper Industry, and continued to chase Claire around.

Dick enjoyed life, especially, dancing the waltz with Claire, and any activity that included his family.

The memorial service to celebrate Dick’s life will take place at Christ Church, 311 South Orange St., Media, PA, on Saturday, July 18, at 10:00am. The family will receive family and friends immediately following the service.