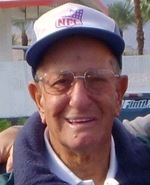 John Coloroso, 86, passed away early Saturday morning, July 25, 2015 in Cathedral City, California. He was born on November 25, 1928 in Dawson, N.M., to immigrant parents from Italy. During the Great Depression his family moved to Denver, Colorado, where he grew up.  John had one older brother and four older sisters, all of whom predeceased him.  John had one son, also named John, who predeceased him and two daughters, Janet and Paula.

John served in the United States Marine Corps during the Korean Conflict and was honorably discharged in 1957, receiving the National Defense Service Medal and the Good Conduct Medal. He worked for Hughes Aircraft Company for 30 years in the Ground Systems Group in the areas of inspection and quality assurance for the Manufacturing and Engineering Divisions supporting the Firefinder Program.  He retired in September 1989.