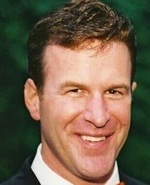 Stephen W. Hepburn, a longtime resident of Newark, Delaware, and current resident of Media, Pennsylvania, died suddenly in his sleep on June 11, 2016 at home. He was 47 years of age.


Steve is survived by his mother, Virginia Hepburn and her husband Ridgeley Scott; his father, David Hepburn and his wife Linda Grambow; his brother, Brian Hepburn; his wife, Betzy Hepburn (nee Bosley Gartman), and their two sons, John Wesley (8) and Robert Stephen (6); and his grandmother, Betty Hepburn. He is predeceased by his grandparents, Dr. Henry G. Schaffeld and his wife Florence, and his grandfather, Lt. Col. John W. Hepburn.

Steve was born in Baltimore on January 18, 1969, to David and Virginia Hepburn. He graduated from the University of Delaware with a degree in Mechanical Engineering and was Director of Proficiency Testing Programs at ASTM International. On September 16, 2006, he married Betzy, an operations executive at Bank of America and his Dewey Beach sweetheart. In 2007 and 2009 respectively, he welcomed his two sons, to whom he was completely dedicated. Steve was devoted to family and friends.

A long-time admirer of muscle cars and motorcycles, he was often found at car shows with friends, family, and his fully restored '68 Pontiac Firebird. He also enjoyed scuba diving and taking his family on adventures he planned. He was a problem solver who enjoyed the process of understanding how things worked and could fix most anything. One of his last projects was teaching his sons to create their own action figures with clay and paint. Steve never met a stranger, could converse on any topic and loved traveling the world. He will be deeply missed by his family, friends, and co-workers.

In lieu of flowers, donations are welcome at the American Heart Association. Condolences may be sent to swhepburn@gmail.com.