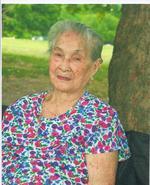 Affectionately known as ‘Lola’, ‘Lola Epay’, and ‘Mama’, Josefa passed away on December 18, 2016 in Upper Darby, Pennsylvania, surrounded by her children, grandchildren and great grandchildren.  She was 104 years old.

One of seven children, Josefa was born on August 27,1912, in Tiblon, Lagonoy Philippines, to Mrs. Gregoria Tejares Ortua and Mr. Esteban Ortua.  She pursued a career as a school teacher, and married Attorney Pedro Servano (died June 4, 2002).  They had 10 children (five girls, five boys):  Ceferina, Josephine, Gregoria, Guillerma, Pedro II, Pedro III, Pedro IV, Marlene, Ceferino (deceased), and Pedro V.
In 1979 she traveled to the United States to join her eldest daughter, Ceferina, and went on to receive her US citizenship in 1986. She paved the way for six of her children to follow, and immediately began her role as grandmother and caregiver.  She was an unstoppable force.  Once her grandchildren were grown, she turned her energy toward other projects, including a small consignment shop that she managed in Upper Darby.  She enjoyed going on long road trips with her family. Lawrence Welk was her favorite show and she loved to listen to the same funny stories told many times over during family gatherings.  Most everything she said and did was about her family.
In 2012, Josefa and her family traveled to the Philippines to celebrate her 100th birthday at the school that she and her husband founded in San Ramon, her hometown. The town arranged for a parade and a performance by the local high school’s marching band.  Over 200 people were in attendance.
Josefa is survived by nine children, 38 grandchildren, 16 great grandchildren,1 great great grandchild, and numerous nieces, nephews, cousins, and close friends.   She was the matriarch, the rock that held the family together - she will be missed.