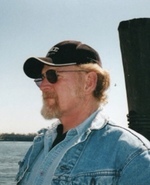 John was born in West Philadelphia and spent his teen years and much of adulthood residing in Delaware County.  There was a special place in his heart for his childhood family vacation destination, Ocean City, NJ.  He was a long time foreman for Asplundh Tree Expert Co. and later drove a school bus for Upper Darby School District.  John was an individual that enjoyed "coloring outside the lines."  He was a proud Vietnam War-era U.S. Navy veteran serving tours in the Pacific aboard the USS Dixie.  He hitchhiked across the United States on several occasions.  He once drove from Pennsylvania to Alaska, only to stay for one day then turned around and drove back.  He survived motorcycle accidents and serious work- related accidents, all the while garnering memorable stories that he would use to regale family and friends with his incredible sense of humor.  Later in life, John and Donna enjoyed traveling to and touring Europe providing him with additional story material.

At John's request, there will be no final service and as sad as that may seem to some, it's actually okay because anyone who was lucky enough to cross paths with John will never forget him.  John's late Mom summed him up best: " He was a character & a good egg!"  Please remember John in your thoughts and prayers.