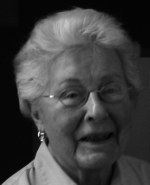 Ruth Elizabeth (Lilly) Wert, age 96, died peacefully on March 6, 2017, in her residence, with family by her side. Born June 22, 1920, in Allentown, Pennsylvania, she was the beloved daughter of Charles Hiram Lilly and Florence Idella (Miller) Lilly and sister of Howard Lilly and the late Melba (Lilly) Williams, all deceased.
She was the cherished wife of Rev. Gerald Paul Wert, who predeceased her in 1998. As was her husband, she was a 1938 graduate of William Allen High School. After she and Gerald Wert were married in 1942, they lived in the communities where he served churches: Easton, Philadelphia (Belfield Avenue EUB), Allentown (First Presbyterian), and Radnor, Pennsylvania (Berwyn Presbyterian), and Cardiff, Maryland (Slate Ridge Presbyterian).
Upon his retirement from Slate Ridge, they lived in nearby Delta, Pennsylvania, where she remained until 2013, when she moved to Wesley Enhanced Living at Stapeley, in the Germantown neighborhood of Philadelphia.
Her life was centered on family, church, and community: to each she brought creativity, and in each she found joy. A skilled seamstress, she designed and made her own clothes and those of her three daughters, and she taught sewing at the Allentown YM/WCA.
As a child she learned to knit from an aunt with low vision, a skill that sustained her when her own vision began to fail in the late 1970s. Over many decades, she knit sweaters, hats, and mittens not only for her family but also for local, national, and international charities, from community shelters to the International Rescue Committee and Church World Service.
Like her mother, she sang with church choirs, and she found great solace in sacred choral music and classical music. An avid gardener, she generously shared perennials with friends and family.
She enjoyed two extended trips to England with her husband in the 1970s, when he served as a visiting pastor and studied there, and she made three long visits to Italy from 2007 through 2009 to visit family.
Her immediate survivors are her daughters Ruth Ann Haussmann, Kathleen Wert (Clifford Labaw), Ellen Wert (Harry Camarda); grandchildren Robert Haussmann (Beth), Matthew Haussmann, and Caroline Uhl (Brandyn), and Nissa Labaw; and great-grandchildren Juliane, Amanda, Carter, and Camryn.
Funeral services will be private. Those wishing to remember Ruth Wert are invited to make a gift to Church World Service (https://cwsglobal.org