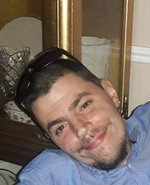 Christopher R. LaManna, 34, of Philadelphia, PA died Saturday, April 14, 2018 at his home.
Born in Philadelphia, he has lived his entire life in the city.  He was known for his simple wit and his enjoyment for playing pranks and jokes on everyone.  He was an avid Philadelphia Eagles football fan.
He was preceded in death by his father Carl Glaser who died in 2006 and his great-grandmother, Amalia “Molly” DiBattista who died in 2007.
Christopher is survived by his mother, Kimberly Montello Glaser; brother David Glaser; sister, Nicole Glaser and her fiance Christina; maternal grandmother, Virginia “Mimi” Montello; his niece, Mia Glaser; uncle, Joey “M” Montello and his aunts Carol Montello, Lisa LaMaina and her husband Carl and Theresa DiBattista; his cousins, Brittany, Ashley, Christy and her husband Jasen, Angelina and Antonio.
Relatives and friends are invited to attend his Funeral Mass 10:30 a.m. on Tuesday, April 24 at St. Dominic’s Catholic Church, 8504 Frankford Ave, Philadelphia, PA 19136 where his viewing will be held from 9-10:30.  Interment will be private at the convenience of the family.            Contributions:www.gofundme.com/christopher1225?pc=em_co_shareflow_m&rcid=r01-152387661786-e31039c577024ff8 .
Online condolences can be made at www.jpdfh.com
Arrangements by David A. Cericola Jr, Funeral Director.
All inquiries regarding the funeral please contact the funeral director at (610) 304-3349.