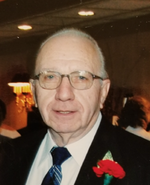 Raymond J. Benshetler, age 87, died August 31, 2018 at Crozer Keystone Hospice at Taylor Hospital. A resident of Prospect Park, PA, Mr. Benshetler was formerly of Bear, DE.  He retired from Sun Oil Co. as a chemical operator in 1993. Mr Benshetler was a Marine veteran having served as a Staff Sergeant during the Korean War.  He was a lifetime member of the Christiana Fire Company where he was awarded Treasurer Emeritus in 2003. Mr. Benshetler wa a 12 year volunteer at Riddle Memorial Hospital and a recipient of the National & Community Service Award signed by President Barack Obama in 2015.  Mr. Benshetler was predeceased by his wife Bonnie Varallo Benshetler in 1999.  He is survived by his daughters Susan Foerster, Diane Mignone , Joel Mignone and a son Joseph Benshetler, 5 grandchildren and 5 great grandchildren.  Memorial Contributions to the Christiana Fire Company 2 East Main St. Newark, DE 19702 would be preferred.