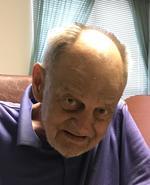 Ronald Charles Bell passed away peacefully on September 5, 2018 after a brave journey with cancer. He was surrounded by his loving family.

Born in Chester Pennsylvania, Ron was educated in the Chester School System.  Ronald worked for the family business, B&H Motors in Chadds Ford and he was a long time, dedicated employee of the City of Chester, PA. After relocating to Wilkesboro, North Carolina he worked for the American Drew Furniture Factory.

Ronnie was a self-taught and accomplished musician. He was well known for his natural abilities on the guitar and banjo and enjoyed performing for crowds. Other musicians would watch in awe, always trying to steal a few of his licks. In his retirement, he enjoyed picking at The Vintage Corner and Westwood Hills Nursing and Rehabilitation Center in Wilkesboro, North Carolina.

Ron will be remembered most for his gentle, caring soul and generosity. A true salt of the earth man, he endeared himself to everyone he met. He will be missed dearly by his many friends and family.

He was the son of the late Andrew Bell and Dorothy Pace Cummings. He was preceded in death by his twin brother, Donald Bell and lifelong soulmate, Emma Rink. He is survived by his loving brother, Andrew Bell (Diane), niece Colleen Bell, nephews Andrew Bell III, Kevin, Sean, and Brian Bell as well as many loving cousins.

Ronnie’s generous and loving spirit continues to touch lives. It was his wish to have his body donated to the University of Pennsylvania Perelman School of Medicine to be used as a tool to further advance medical research.

Online condolences can be made at www.jpdfh.com.

The family will be holding a memorial service at a later date. Interment will be private.