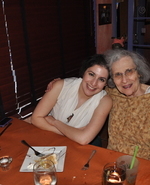 Bennett-Anita
(nee Gaylburd)
The family mourns the passing on September 6, 2019 of Anita Bennett, age 93, who succumbed to cancer. Born in 1926, Anita was the daughter and youngest of three offspring to her late parents Jacob and Tanya Gaylburd, and sister to Gama Gilbert and Marcus Gaylburd (both deceased).
Beloved wife to Joseph Bennett (deceased), she is survived by their son Jay (Spouse: Lynn) and daughter, Martha (Spouse: Steven). She is also survived by her three grandchildren: Karen (her spouse and their son and daughter), Andrew (his spouse and their two sons) and third granddaughter, Lauren. Other surviving family members are her niece, nephew, and cousins.
Anita was a true native of Philadelphia which was her birthplace as well as the city in which she spent her years as a child, teenager, and young wife. She graduated from Simon Gratz H.S. (class of 1943), and later received her Bachelor of Arts Degree (June 1946) from Pennsylvania State University. Given her major in Arts and Letters, there is no doubt about her keen interest in the arts and humanities which continued throughout her life. Anita began her work career in the Department of Public Welfare and later worked for the Philadelphia School District (Attendance Services Division) as a home and school visitor.
Anita will always be remembered as a caring person with a big heart who anyone could depend upon for comfort and support. People could talk to her about anything and she was always there to listen. She loved good conversation on numerous subjects ranging from serious to humorous. These qualities endeared her to so many people. She donated whatever she could to a variety of charities and service organizations as part of her desire to help those in need and to impact change for the better. Anita applied these wonderful qualities both to her profession and to her family and friends, and in doing so, touched and enriched the lives of everyone around her.
Anita faced hardships in her life; among them, living through the Great Depression era of the 1930’s, losing her parents and a brother at an early age, and taking care of her husband (a loving spouse and father) in the aftermath of his stroke, yet managed to maintain her resilience, grace, and compassion for others.
She will be forever loved by her family and greatly missed by everyone who knew her.
A private period of mourning will be observed by immediate family. Memorial donations may be sent in Anita Bennett’s name to the American Cancer Society or the Montgomery County SPCA (given her love of animals).