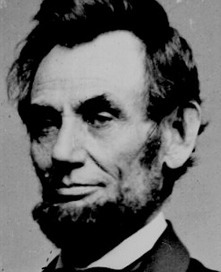 Abraham Lincoln the 16th President of the United States of America

In 1840, Lincoln became engaged to Mary Todd, who was from a wealthy slave-holding family in Lexington, Kentucky. They met in Springfield, Illinois, in December 1839 and were engaged the following December. A wedding set for January 1, 1841, was canceled when the two broke off their engagement at Lincoln's initiative. They later met again at a party and married on November 4, 1842, in the Springfield mansion of Mary's married sister. While preparing for the nuptials and feeling anxiety again, Lincoln, when asked where he was going, replied, "To hell, I suppose."

In 1844, the couple bought a house in Springfield near Lincoln's law office. Mary Todd Lincoln kept house, often with the help of a relative or hired servant girl. Robert Todd Lincoln was born in 1843 and Edward Baker Lincoln (Eddie) in 1846. Lincoln "was remarkably fond of children", and the Lincolns were not considered to be strict with their children. Edward died on February 1, 1850, in Springfield, likely of tuberculosis. "Willie" Lincoln was born on December 21, 1850, and died on February 20, 1862. The Lincolns' fourth son, Thomas "Tad" Lincoln, was born on April 4, 1853, and died of heart failure at the age of 18 on July 16, 1871. Robert was the only child to live to adulthood and have children. His last descendant, grandson Robert Todd Lincoln Beckwith, died in 1985.

Captain of the Illinois Militia, US Congressman, United States President

Lincoln's flag-enfolded body was then escorted in the rain to the White House by bareheaded Union officers, while the city's church bells rang. Vice President Johnson was sworn in as President at 10:00 am the day after the assassination. Lincoln lay in state in the East Room, and then in the Capitol Rotunda from April 19 through April 21. For his final journey with his son Willie, both caskets were transported in the executive coach "United States" and for three weeks the Lincoln Special funeral train decorated in black bunting bore Lincoln's remains on a slow circuitous waypoint journey from Washington D.C. to Springfield, Illinois stopping at many cities across the North for large-scale memorials attended by hundreds of thousands, as well as many people who gathered in informal trackside tributes with bands, bonfires and hymn singing or silent reverence with hat in hand as the railway procession slowly passed by.