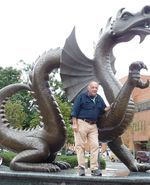 Eric Berg, sculptor whose creations include Reading Terminal’s Philbert the pig, dies at 74

Eric Berg, 74, a Philadelphia sculptor perhaps best known as the creator of Philbert the pig at the Reading Terminal Market, died of heart disease Monday, April 20, at Pennsylvania Hospital, his family said.

Like many artists, Mr. Berg, of Center City, worked with abstract geometric forms. But naturalistic subject matter became the bread and butter of his commissioned work. He leaves behind a zoo’s worth of bronze animal sculptures, many on public view in the region and beyond.

He sculpted a sea lion for the Ronald McDonald House in Camden, a panda for Children’s Hospital of Philadelphia, and a Florida panther for the Everglades National Park.

The grizzly bear and turtle family in Fitler Square are his, as is the angular Drexel University dragon at 33rd and Market Streets, just a few blocks from the Powelton Village studio where he worked.


While big gestures like the Drexel dragon draw attention, his more important legacy might be in a pair of bronze gates on the Gardener’s Cottage in Rittenhouse Square, said Penny Balkin Bach, executive director and chief curator of Philadelphia’s Association for Public Art. The gates comprise a metal tracery of vines embellished with a dog, squirrel, snail, and other creatures.

“They don’t rely on the grand gesture, they are actually the opposite,” said Bach. “And I think it’s more of a challenge to draw people in rather than create something that you can’t miss. That’s why they are very special. There’s also nothing like them. The animals on there are the animals you find in Rittenhouse Square, so there is a site-specific aspect to them that is extremely appealing.”


“People will leave notes there or leave something on the dog’s nose. It just turned into this wonderful thing,” said Kiki Bolender, architect for the restoration of the small building on the west side of the square.

in 2010, standing at the new gates to Rittenhouse Square's Gardener's Cottage are sculptor Eric Berg (left), who created the piece, and Tony DiSalvo, who raised funds for it.


Born in Pottstown and raised in Allentown, Mr. Berg earned an economics degree from the Wharton School before going on to receive a master’s in fine arts from the University of Pennsylvania.

The Philadelphia Zoo gave him his first commission, in the 1970s.

“I carved little animals in stone, and whittled some other little pieces, a whale and penguin in ivory. So, I had this array of animals, and I went to the zoo and asked if they needed any animal-based artwork,” he told the Haddonfield Sun last year. “They were about to undergo a new project, so I took pictures to the project architect and he said … a warthog.”

Animals were a lifelong love.

“His aunt bought him a book of animals at 7 or 8, and he would just pore over it,” said Mr. Berg’s wife, Claudia Mills. “In conversation he would refer to that time, how special it was to have that book that opened his eyes to another world.”

But it was a meeting in the 1980s with abstract sculptor José de Rivera that clinched the focus of his work, said Mr. Berg’s son, Jesse.


“Rivera looked through his portfolio and said, ‘You do nice work, but you are going to have to choose between animal sculpture and geometric abstract sculpture, or it’ll muddle your career.’ I think that was influential,” said Jesse Berg. “Dad didn’t completely abandon geometric work, but I think that really pushed him to focus on animals.”

Just before his death, he had completed sketches for crabs, ducks and frogs, as well as a series of barnyard animals, for two playgrounds at a housing project in the Red Hook section of Brooklyn. The realization of those sculptures will be carried out by an assistant. “We know it’s going to be something children and adults are going to enjoy for generations," said Richard Roark, the project’s landscape architect from the firm Olin.

Mr. Berg’s pieces are collected privately and have been widely shown in museums and galleries. “But by far he was most proud of his public work,” said his son, “because he loved the access it gave children to nature and the natural world. He considered it the highest compliment when a bird would land on one of his sculptures.”


In addition to his wife and son, he is survived by a brother, Bruce Berg, and two grandchildren.

The family plans to hold a memorial at a later date.