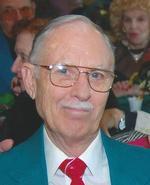 Clarence Anderson Carter born in Kansas City, MO on April 16, 1926 passed away April 15, 2013 (one day before) his 87th birthday. Mr. Carter attended schools in Kansas until his family moved to Phoenix. He attended Phoenix College and later graduated from U of A in Tucson majoring in Business and Sales Administration. He also attended the Famous Art School in New York. He enlisted in the Navy in 1944 and served in the South Pacific and was discharged in 1946. He worked for Realty Sign Co for many years, retiring in 1963. He was a talented artist and an avid ballroom dancer, he also enjoyed golf. He is survived by his companion Hazel Norton, his brother Kenneth Carter, nieces Joanie Carter and Ann Neill (TX). A private service will be held at a later date. Burial at National Memorial Cemetery of Arizona.