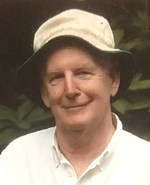 Thomas F. Crane Jr, devoted and loving husband, father, and grandfather died peacefully on Saturday May 2, 2020 at the Little Flower Manor nursing home in Darby, PA. He was 81. Tom will be remembered for his sense of humor, his kindness, his moral and spiritual strength and his love and devotion for his wife Agnes, who passed in 2019. Tom, like his wife, embraced life on his own terms. He took risks and seized opportunities that led to a successful career and deep personal connections with those he knew and loved. His spiritual path guided him to yoga and meditation more than 40 years ago and to India on several occasions as he pursued a deeper, more profound connection to life. He will be missed by his family and many friends, but his love of storytelling (in the grand Irish tradition) guarantees he will live on for many years to come in the memories of those who love him. Tom was born and raised in Fountain Springs, a rural town in Pennsylvania and the setting for his richest and most memorable stories. He was an altar boy and Eagle Scout, but also a central character in hilarious tales of mischief. He attended Mount St. Mary’s University in Emmitsburg, MD and earned an MBA from St. Joseph’s University in Philadelphia, PA. Tom met the love of his life, Agnes Dougherty, at a dance in Frackville, PA when they were both home from college. They married on February 27, 1965. Tom began working in insurance, before shifting gears in the early 1970s to team up with his brother-in-law and open one of Philadelphia’s first Mexican restaurants. A few years later, Tom found his true calling lay elsewhere. After battling his own addiction, he decided to help those struggling with drug/alcohol dependency. Eventually, he ran a drug/alcohol treatment facility serving the Philadelphia area before retiring in 1999. In their golden years, Tom and Agnes enjoyed spending time with each other and travelling throughout the United States in their convertible Ford Mustang. In 2009 Agnes suffered a serious stroke, but recovered and enjoyed precious years with her grandchildren before her health began to decline again. Through it all, Tom dutifully took care of her, staying by her side until her death in January 2019. Tom was diagnosed with Parkinson’s shortly after and his own health began to quickly decline. Tom leaves his children--Thomas III, Stephen and Agnes- and his four grandchildren: Misgana, Biruk, Eleanor, and Ian. In light of restrictions due to COVID 19, a memorial will be planned at a later date. For those who would like to share personal stories and photos, the family has created an email, thomascranememorial@gmail.com, where you can send your remembrances.

Home
MEMORIAL CREATED BY:
Philadelphia Cremation Society on May 03, 2020