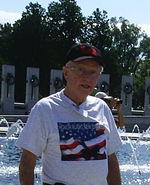 Thomas E. Todd (1924 – 2020).  Tom died peacefully on May 2nd in Downingtown, PA.  A proud WWII veteran, Tom enlisted in the Army in 1943 and reached the rank of T5 (Corporal).  As a member of the Corps of Engineers, Company B 297th Engineer Combat Battalion he was awarded the Bronze Star and participated in five campaigns including landing on the beaches of Normandy for D-Day operations and fighting alongside his fellow soldiers in the Battle of the Bulge.  Using training he received in the military, he worked for over 40 years as an electrician with IBEW 164.  Tom was a 60+ year Mason, most recently belonging to Williamson Masonic Lodge in Downingtown.  Tom is survived by his sister Elizabeth Urcinole, his three children, daughters Deborah (Dennis) LeSage, Dori (Armando Velarde) Ryder and son Thomas A. Todd, his grandsons TJ and Danny Ryder, and his only great grandson Tyler Ryder, two nephews, a niece and several great-nieces & great-nephews.

Cremation will be cared for by the Cremation Society of Philadelphia. There will be no funeral per his request.  Interment of his ashes at Arlington National Cemetery will take place at a later date.  In lieu of flowers, please consider a donation to one of the charities close to his heart – The National WASP WWII Museum, 210 Avenger Field Road, Sweetwater, TX  79556 or The Wounded Warrior Project, PO Box 758516, Topeka, Kansas 66675

Home
MEMORIAL CREATED BY:
Philadelphia Cremation Society on May 03, 2020