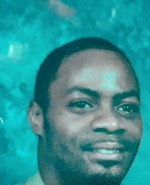 Henry Maurice was born July 17, 1963 to Ida Moore and William Benson.   However; due to unforeseen circumstances he and his sister Belinda was raised by the loving family of Arthur Smith Sr and Mae Smith in the Overbrook section of West Philadelphia.  He graduated from Overbrook High School in 1981.  He then worked various jobs.  Most notably are Giordano’s and The Kirkbride Center.  Henry loved working with his hands and no matter where he worked, he formed a special bond with his co-workers, the patients, and customers. Things were never easy for Henry but no matter what he was going through, he always had a smile and joke for you. Henry also moved down south for a time but then returned to his Philly roots. He leaves to mourn his daughters, Naomi Morris, Shemika Bethea and a son Maurice Moore as well as four grandchildren. Also, mourning the loss is his sisters, Belinda Moore, Eileen Brewster, Celestine Moore, Renea Benson and Phyllis Douglas, Lawuna Jenkins as well as a host of family and friends.
The Family would like to thank everyone for their prayers and generous donations.