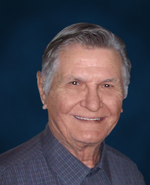 Marty was a World War II Veteran serving in the US Army.  He was an avid sports aficionado during his entire lifetime and for one season in the ‘40s played with the Buffalo Bisons Minor League baseball team.  Life took him in another direction, and he joined the US Army Corps of Engineers (Fort Mifflin) where he retired after 35 years of service and afterwards was a driver for Macar Auto Supply in Drexel Hill for 30 years.

Throughout his life he was an avid reader and history buff who enjoyed woodworking and restoring religious sculptures.

He was known as a caring, giant of a man, who loved people and most of all, life!


Funeral mass and interment at St. Mary’s Cemetery, Cape May, NJ will be announced after the New Year.

In lieu of flowers, donations can be made to the Catholic Charities Appeal of the Archdiocese of Philadelphia or the American Cancer Society in his name.