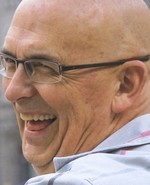 Robert Vincent Goodman of Audubon, Pennsylvania passed away peacefully in his home on April 25th, 2021, just eight days shy of his 78th birthday. He was born in Hamilton, Ohio on May 3, 1943 to Wilbur Burris Goodman and Clara Derricks Goodman. He met his beloved wife of 55 years, Ann Riley Goodman at Kent State University in 1962. It is she who he credits as saving his education by getting him out of the fraternity house and into the library.

Bob graduated from Milford High School in Milford, Ohio in 1961, received a degree in Electrical Engineering from Ohio State University in 1966, and an MBA from Rensselaer Polytechnic Institute in 1969.

Bob began his career in Information Technology as a Design Engineer with General Electric, in Pittsfield, Massachusetts. He worked for General Electric in many locations and positions for over 23 years. He then served as Chief Information Officer for Pep Boys, and subsequently in the same role at Zany Brainy. It was during those years that he also began his teaching career as an Adjunct Professor at Drexel University. As the culmination of his professional career, Bob joined American Friends Service Committee as Information Technology Director. He was proud to work with an organization whose mission of promoting peace with justice was in sync with his personal values.


Having been raised in a strong church environment, Bob sought that sort of community throughout his life. As an active member of the Main Line Unitarian Church in Devon, Pennsylvania, he taught the youth group, served on the Board for several years, and served a term as President of the Board. His curiosity about the history of Unitarianism led him to join the Partner Church Council.  Through that council, he travelled to Varfalva, Romania to visit the Unitarian community there several times, and the bonds he formed with the families that he met there lasted for the remainder of his life.

Bob’s work with the Shannondell Democrats energized him these past 6 years. Determined to be the change he wanted to see in the world, he spearheaded efforts with the local Democratic committee to bring out the vote in 2020. Always eager to engage, he wore message buttons on his suspenders, inspiring people to ask him about a particular candidate or issue. He coordinated events on-site at Shannondell to connect officials with the residents, directly contributing to the success of many local Democratic campaigns.

On fall Sundays, he could be found watching the Philadelphia Eagles with his wife and son. With his big green Eagles jacket, green Eagles hat, and (in one particularly memorable season) the green Eagles logo emblazoned boldly on his head, he made his loyalties known. On fall Saturdays, he played up the family Big-10 rivalries enthusiastically. He enjoyed every walk he ever took, every game of pool he ever played, and every movie he ever watched.

He had a gift of connecting with people from all walks of life. He will be remembered as a community builder, a loving uncle and brother, a proud father and grandfather, and a devoted husband.

He is survived by his wife, Ann Riley Goodman, his siblings Joanne Goodman Keith, Wilbur Burris Goodman Jr. (also known as Jack), and Elaine Goodman Wing. Bob is also survived by his son, Gregory Brice Goodman, his daughter, Gwendyl Lynn Harter (Boyd), and his grandchildren Quintin, Aspen, and Carson. In addition, Bob was blessed with an extended family of nieces, nephews, grand nieces, grand nephews, and more, who have convened annually for 49 years to celebrate family and each other.

In lieu of flowers the family wishes that memorial contributions be made to the American Friends Service Committee (www.afsc.org) at 1501 Cherry Street, Philadelphia, PA 19102.

Services and interment will be held privately. As a celebration of Bob’s life, his family invites you to share a remembrance, a thought, or a reflection here in the guest book, and to enjoy a walk in his memory.